Had a great County Convention to with close to 80 Republicans at the Friday Harbor Grange. Delegates were elected to the attend the State Convention in Tacoma and we also approved the 2012-2013 SJCRP Platform. 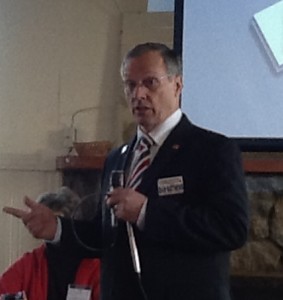 What an honor to meet and hear 2nd Congressional Candidate Dan Matthews speak.  Dan is the Real Deal having served our country in Iraq and Vietnam. Was an airline pilot when 911 occurred and knows his opposition Congressman Rick Larson well. “Rick Larson is just a rubber stamp for President Obama and  Nancy Pelosi,” said Matthews. “It is time to put aside partisan politics and do what is right for this country.” Dan sounds like a no nonsense lets get the job done kinda guy to me. I almost ran him over setting up tables for the event. He apologized and stepped out f the way.  I told him I appreciate a potential Congressman who knows when to get out of the way.  His wife thought that was hilarious. I like him! – Rick Boucher