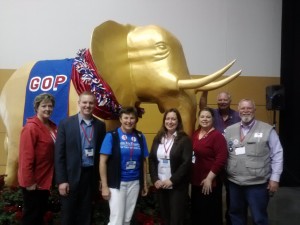 Rebecca Johnson represented San JuanCountyin the Rules Committee which established the process to conduct convention business.Cindy Carter incorporated the San Juan County Republican Platform into the State Republican Platform by serving on the Platform Committee. Their work finished at midnight Thursday. Levi Rawls worked on the Credentials Committee assuring correct seating of delegates for voting. Michelle Loftus chaired the Congressional District 2 Caucus electing three delegates, three alternates and one elector. All elected from CD2 declared support for Mitt Romney. Ron Paul supporters were satisfied with proper procedure. Everyone worked together and the caucus adjourned at 8:41 PM. Alex Gavora served as secretary reporting minutes to State Staff while Rebecca Johnson served as parliamentarian for the caucus. Rebecca’s knowledge of rules was essential as conflicts occurred. Nick Johnson and Dennis Hazelton also served as parliamentarians keeping the crowd under control. Levi Rawls assisted the tellers for ballot processing. San Juan County Republicans were proud to serve CD2 and were complimented for their work.

So much work was done for our county within the convention business, however much work was also achieved by our delegates between sessions. Relationships were strengthened with State officials and candidates. Our delegates voiced our county needs to other delegates as well as elected officials. We found that we share many needs with other counties so coalitions were formed to resolve our problems. SJCRP left the State Convention optimistic about the upcoming elections and ready to work for our county, state and nation. God bless America!