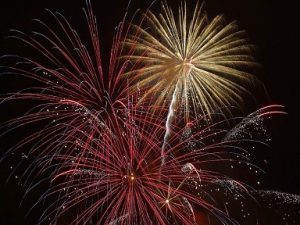 I hope for our nation’s Independence Day
that you are surrounded by friends and family!
May God Bless America!

There is so much to be grateful for in this great nation. We sometimes are guilty of dwelling on what is bad or worse or negative. Let us all remember the extraordinary level of personal safety that we all enjoy, the longer lives, the greater opportunity; the ability to talk to relatives half a world away, reliable power and clean water. Many places in the world lack these things. Although things may vary from bad to good over the course of a human life, our own lives when placed beside our great-great grandparents enjoy a level of prosperity and peace that must’ve been almost impossible for them to imagine.

Yet sometimes there is something lost in our affluence. I have lived in many places around the world, and observed that people are often happier than those I encounter in the west. Our prosperity allows us to not need each other, and it erodes our sense of community and family ties. Humans are social creatures that need to belong and contribute. The value of remaining together as extended families, even into retirement and old age, have repeatedly been shown to be tremendously beneficial to a sense of well being and community. And yet when a nation reaches a certain level of affluence, the first thing people do is separate into their immediate families.

We are blessed to live in a county that still has a sense of community. Many places do not. In many places nobody even knows their neighbors names. Please consider volunteering to help with the Republican Party fair booth, a wonderful annual event that has “community” written all over it. You can sign up here. I have done it many times, and only rarely do you encounter people who are determined to make things difficult.

I wish you all the best! (Remember, personal fireworks are illegal)

Central Committee meeting, 11:30 am. Later that day, 2 pm, ice cream social. No charge! Please bring cookies or brownies to share. Ed Kilduff will be speaking to us about water issues, rural development, and the Hirst decision. Both events at Earthbox Inn and Spa in Friday Harbor.

This week we avoided a budget shutdown in Washington State. You may have heard on the news of many state services shutting down, but it appears that will not be the case. Seattle Times reports. See also “Proposed Washington state budget boosts spending by 13.5%” here.

The main issue that made the budget difficult this year was the McCleary decision, where the state supreme court said that the state was not keeping its (state) constitutional obligation to adequately fund education. The conservative Washington Policy Center has an excellent article on the McCleary decision.

Although the budget deal announced 6/29 is very new and has not yet been fully covered, they also posted a brief piece explaining the new budget. It seems that state property taxes will go up, and that the state will be looking for new revenue streams (*ahem* — taxes) to cover the budget increases.

The state legislature has been trying to find a way to deal with this for several years. This is just one state supreme court decision among many that has broadened the role of government in our daily lives. I cannot comprehend how a judge would think himself better qualified than our elected representatives to determine what adequate funding for education means.

These kinds of things illustrate how much state politics matter — and yet they are often ignored. It makes sense to point out here that Jinyoung Lee, GOP candidate for the 45th legislative district, is under attack by the left! This isn’t suprising, since she is in the lead financially. This race will determine who controls the state senate. Her campaign says that the Seattle, “Eastside Leadership Council” is pumping hundreds of thousands of dollars from out of state special interest groups in attack ads against her.

Research by the UW into the effects of Seattle’s new minimum wage have shown that the measure has been harmful. So what did the mayor do? Try to find a different study! WA Policy Center ran a 10-part series on this, the most recent one here, and even the Seattle Times criticized town hall.

SJC Democrats are being investigated by the (state) Attorney General’s office for financial irregularities (Journal and the Guardian report)– apparently for the most part late recording of payments and that sort of thing. I’m not inclined to may hay from this, Tim Eyman, the Whatcom County Republicans, and the King County Democrats were all penalized for a range of violations. Election finance law is incredibly complex and seems to be designed to keep anybody not a lawyer or accountant from being able to run for office, and every volunteer organization struggles to get such unpleasant work taken care of responsibly. We’ll see what happens and how serious the charges turn out to be.

It’s been a rough few years for CenturyLink and by extension all of us, but this attitude “Centurylink decline to explain landline outage” doesn’t help. Rockisland discussed some of these issues in their June newsletter here. (for those who care: the part about the theoretical maximums for copper cable is not entirely correct, by twisting two cables together you actually can get 25 mb/s ADSL in F.H., but that’s splitting hairs… or cables, and it’s true that a single cable cannot.)

On the subject of utilities, If electricity costs are going up, know that it’s not just here. “Seattle-area customers can expect to pay more for electricity starting this fall,” Seattle TImes.

F.H. is expanding it’s parking on the former Browne’s Lumber lot, located at 330 Spring Street. Journal and the Guardian reports.

Orcas school board has proposed two separate levies, one for repairs and the other for the new track. They will be voted on in November. Sounder reports.

It’s time to turn in petitions for I-552, which was supported by the WA State Republican Party and Just Want Privacy. Unless you agree with what the democrats say about it.

WSU had a data theft, and 1 million people had their data compromised. I happen to be one of them, although I never went to WSU. Seattle Times reports. It’s worth learning how to detect phishing attempts and scans.

An example of courage when an Imam protects the man who attacked his congregation until police can arrive and properly arrest him. USA Today.

“How to Defeat Weaponize Empathy.” A PCO sent this to me, and it resonated.

Labor unions are going after the Freedom Foundation, a conservative WA State thinktank. The Blaze reports.

July is a busy month and many community organizations don’t hold regular meetings. OPALCO will have no July meeting.

Chair, San Juan County Republican Party
Email: sjcrpchair@gmail.com
“No matter how conservative your views may be, unless you do something about it you really aren’t that conservative.”