Skip to Main Content
By KARL ROVE
Updated Nov. 13, 2013 7:31 p.m. ET
A few minutes into last Thursday’s interview with NBC’s Chuck Todd, President Obama said of the millions whose health insurance was canceled, “I am sorry that they—you know, are finding themselves in this situation, based on assurances they got from me.”It was not a real apology. And what truly mattered was what Mr. Obama said at the interview’s start. “First of all, I meant what I said,” he told Mr. Todd, about his promises that people could keep their health plan if they liked it. “And we worked hard to try to make sure that we implemented it properly. But obviously, we didn’t do enough—a good enough job—and I regret that.”

This is nonsense. The mounting cancellations of people’s health plans is not a result of faulty implementation. The Affordable Care Act was designed to make unavailable health-insurance policies that didn’t include its extensive, expensive and often unnecessary provisions.

For example, one provision in the law called “Essential Health Benefits” requires that every policy offer a wide range of benefits including mental health and addiction treatment, and maternity care (even for single men or women past childbearing age), and cover 100% of the cost of an array of preventive services. All this drives up the cost of insurance. 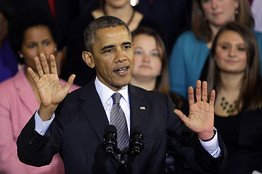 Another provision causes younger, healthier Americans to pay higher premiums than they would otherwise in order to subsidize coverage for older, less-healthy people.

ObamaCare’s “Medical Loss Ratio” provision requires insurers to pay 80% (in the individual and small-group markets) or 85% (for the large-group market) of each year’s premiums for claims. The provision reduces an insurer’s ability to build a reserve for years where claims are more than 100% of premium income. This too raises the cost of insurance.

Policies that don’t meet these and other standards are not in compliance with the law. This will affect more than the individual market. ObamaCare will cause cancellations of group policies, too, especially those covering older, less healthy workforces.

Mr. Obama’s assertion in the NBC interview that “the majority of folks” whose coverage is canceled will “be able to get better care at the same cost or cheaper” is also likely to be false. The higher premiums that result from ObamaCare’s bells-and-whistles coverage mandates may be offset for some by subsidies, but most people will pay more.

This problem will get worse and poses a dilemma for Mr. Obama and Democrats. A March analysis by Healthpocket.com estimated that less than 2% of individual plans comply with ObamaCare’s mandates. A Nov. 7 study by McClatchy Newspapers MNI +3.09%suggests as many as 52 million people, including many covered by their employers, could lose their plan.

As the 2014 election approaches, these people will be (a) losing coverage or have lost it already, (b) shopping for new policies, (c) suffering sticker shock over higher premiums and deductibles and (d) wondering why Mr. Obama called their previous policy with doctors they liked “subpar.” Then, next September and October, they’ll be told about premium increases for 2015.

Mr. Obama has no easy out. White House aides floated a trial balloon of covering premium increases for people with canceled insurance who don’t get subsidies. Good luck convincing congressional Republicans to pay tens of billions to fix a problem the president created, shoved down the country’s throat, and then misled people about.

Last Sunday Democratic National Committee Chair Debbie Wasserman Schultz told CNN’s Candy Crowley that “Democratic candidates will be able to run on ObamaCare as an advantage leading into the 2014 election.” Republicans should pray every night that Democrats take her delusional advice and make ObamaCare their campaign’s centerpiece.

The Affordable Care Act has become toxic, especially among independents who will decide the 2014 contest. In a Nov. 11 Quinnipiac poll, 30% of independents approved of the health-care law.

Since September, Mr. Obama’s approval on health care in the Pew Research Center poll declined four percentage points, to 37%. His overall job approval dropped to 41% from 44%. Worse are the hits to his credibility. In the Quinnipiac poll, 46% of registered voters and 51% of independents believe Mr. Obama “knowingly deceived” Americans when he promised they could keep their health plan if they liked it.

Until now, many people who disagreed with Mr. Obama’s agenda still liked him. But a late October Fox poll found his personal favorability at 45% and his unfavorability at 50%. Duplicity will do that. And while the president may think everything about ObamaCare will be OK soon, fear is growing among Democrats who see little time and few ways to avoid a 2014 slaughter.