January 12, 2019 – The elected PCOs (Precinct Committee Officers) from the 2018 general election met in Friday Harbor, WA. Amid like minded San Juan County Republicans they discussed and then acted to elect new Executive Committee Officers for the next biennium. Every two years, by Washington State statute, county parties must meet and re-establish executive members by vote of elected PCOs.

In this Re-Organization meeting, the Elected PCOs elected the following to officer positions in the San Juan County Republican Party:

In her first action as Chair, Lynda Gerpheide appointed the following positions:

In addition to the Elected PCOs listed below Lynda appointed other PCO positions.

WHO WILL TAKE THE TORCH?

Back in the 90’s I wrote an editorial for the Republican newsletter with the title, “Who Will Take the Torch?”  Although that article is long ago lost, I recall the first sentence was another question:  “When the forty-somethings of today retire, who will take up the torch and continue fighting the good fight to protect our freedoms?”

At that time, I was one of those forty-somethings.  The WWII generation was starting to retire from activist politics and while staying involved in less active ways, they had entrusted the Baby Boomers with the day to day tasks of keeping the faith in our American system of government.

Today the politically correct term for my generations is “senior citizens”.  At the December Republican Party meeting I looked around the room and other than our chair, Nathanael, the rest of us were showing evidence of time passing.  Average age in the room including Nathan’s 30+ years was probably sixty-something.  The reality is my generation is getting too old to keep doing this.

So several decades later, I am asking again “Who will take up the torch with the seventy-somethings retire?”  If you are a Generation X, Generation Y or Generation Z please hear my plea… GET OFF YOUR COUCH AND GET INVOLVED.  We need your new ideas and energy.

If you are under fifty something or younger, I beg you… Make a new year’s resolution to become informed about what is going on in our nation, state and county.  If you are old enough to have kids or grand kids get them involved so they can learn now and be ready when you want to retire from being active.

We are facing some challenging times.  Conservatives are the minority in San Juan county.  Our task is to fill the role of opposition party without becoming a strident and shrill opponent.  We must not fall into the convenient trap of personal attacks, but we must make our positions clear and educate  voters.

The misinformation that socialism is a good thing has crept into our schools and our government institutions at every level.  It was blatant in the politics of the last Presidential election when Bernie Sanders, an avowed Socialist, promised to spend other people’s money to take care of people from cradle to grave.  He or someone of his same persuasion will be back in the next election.

At the county level, those of us who believe in free speech, property rights and other foundations of our liberty such as respect for the flag are sadly outnumbered.  What are you going to do about it?

Here’s a suggestion:  Come to the San Juan County Republican Meeting on Jan. 12 at the China Pearl in Friday Harbor.  The meeting begins at 11:30.  Lunch is available.  We will be electing new officers and the new chair will be looking for volunteers to help.    Volunteer for just one thing and make a difference!

Thank you for all your emails and calls concerning the Republican Fair Booth. Nice gentle conversations at the market and at church have been so encouraging on this matter. We have put so much work into providing a Republican Fair Booth in the past. The Nerf Gun Shooting Gallery, Constitution Trivia, the Cotton Candy Trump Hair, the Patriotic Jigsaw Puzzles, and much fun supportive conversation were activities we enjoyed. Planning begins in January each year. Now that we cancelled this year, your encouraging words make me realize the booth will be missed.

Do you ever have that nagging feeling about something? The voice in my head said we should not provide a Republican Fair Booth this year. In 2016 our booth was vandalized with eggs and tossing of the booth contents. During the first 3 hours of the 2017 SJC Fair, police assistance was needed to address a most loathsome individual who was harassing and threatening. For the remainder of the 2017 SJC Fair the booth volunteers were subject to spitting, name calling, obscene hand gestures, protests and verbal threats. Physical contact was narrowly avoided, and fear was felt by booth volunteers. (see Islands Sound Article)

If the ugly behavior escalates further, I am sure someone will be hurt. I could not ask volunteers to put themselves in harm’s way this year. I take full responsibility for the lack of the Republican Fair Booth this year.

What to do now? We have much cause for happiness. The recent election results were very favorable to us. Michael Petrish (support Petrish) is bringing voters across the aisle for the 40th LD Rep race. Susan Hutchison (support Hutchison) will move forward to the General Election and give Cantwell a fierce fight for the Senate seat. I know Susan personally and she will be an amazing Senator. I can’t wait to see the debates! President Trump continues to plow through the swamp getting America on track again. Healthcare, immigration, trade economics, and international strength are being addressed while political correctness takes a back seat. This is what America has needed.

Please donate to our brave candidates. They use the money for advertising of their positions and message. There is a bright horizon ahead. 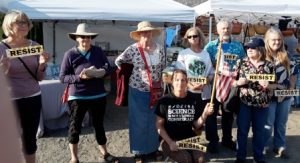 REGARDING HARRASSMENT AT SJC FAIR: WE ASK FOR A LOWERING OF TENSIONS IN OUR COUNTY, AND ASK FOR TOLERANCE OF ALL PEOPLE, INCUDING CONSERVATIVES. WE CONDEMN INTOLERANCE EVERYWHERE.

Last week our volunteers at the Republican fair booth were:

We are hardly the first to be treated this way, but we condemn all such behavior, whether directed at us or at others. We are disappointed that events in far off places were used to justify aggressive and bullying behavior towards their neighbors. We are grateful to those who were polite, even friendly, and there were many of those too. But such hostile behavior was far from isolated.

We do not believe the origin of this was the SJC Dems, this was unprompted hatred, justified based on perceived anger and hate in others. We are proud of the polite and generous way that the men and women manning our booth handled such hostility.

Thank you to the hundreds of conservatives who came by and expressed their support. They were coming through all day, all week, glad that we were there. There are thousands of under-represented conservatives in this county, human beings who everyday come into work and keep their heads down because they don’t want to lose their jobs, or have their cars vandalized, or otherwise be harassed for practicing democracy.

But frankly, we are tired of attempts to bully us while complaining about bullying. You have every right to say what you believe, just as we do. But just notch down the hysteria please, and remember that we are neighbors.